Twitch is a streaming platform which allows gamers to live-stream their gameplay and broadcast it to the world. YouTube was created for sharing videos, whereas Facebook is an online social media website that has become primarily known for its use of video content in posts about friends and events. 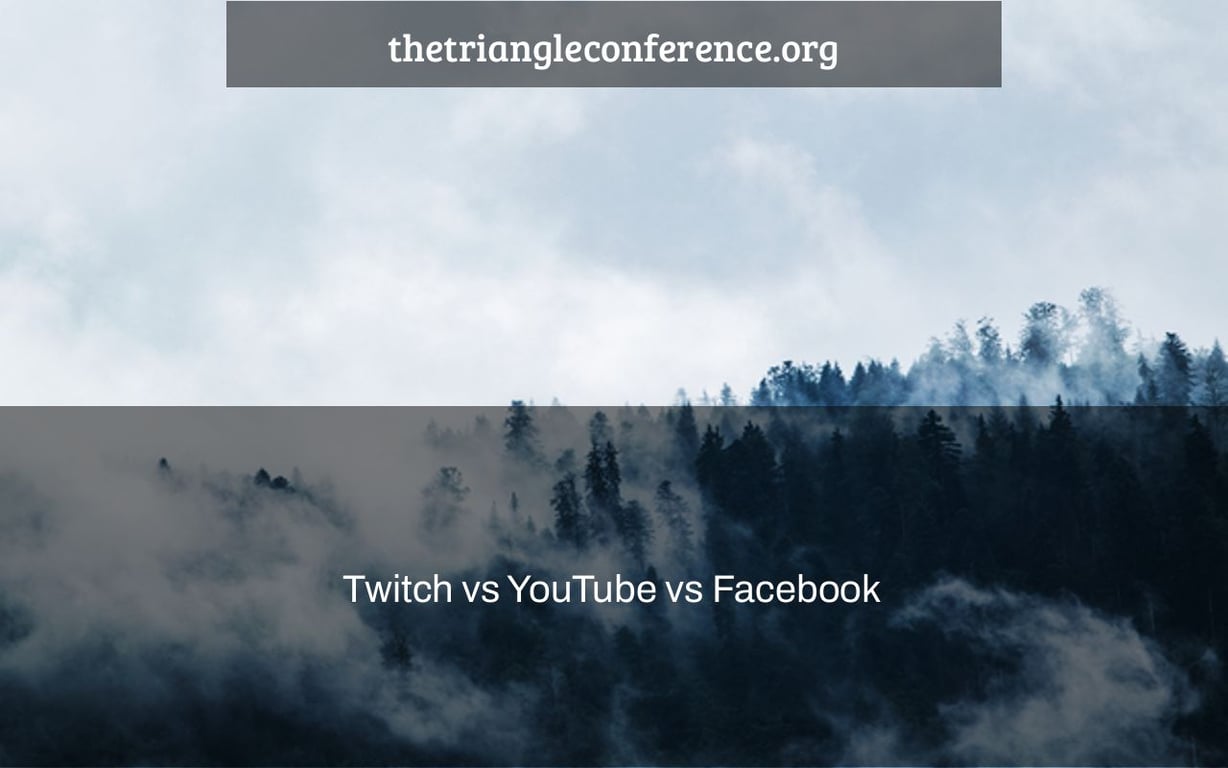 Once you have all of the necessary equipment and are ready to begin your online gaming adventure, you must choose a platform to host your live broadcast. The platform you choose to broadcast video games on may make or ruin your streaming career. With so many alternatives, it’s crucial to weigh all of your options before deciding on the video game streaming platform that best suits your requirements. The good news is that you should be acquainted enough with the three most popular live-streaming sites — Twitch, YouTube, and Facebook – to have a basic idea of what each has to offer. Nonetheless, each site has distinct pros and disadvantages based on your circumstances, so you should explore each choice to see which video game streaming platform is best for you.

We’ll break down the benefits and drawbacks of each video game streaming platform in this post so you can choose the best one for your live broadcast.

Twitch is a video streaming service owned by Amazon.

Twitch bills itself as “where millions of people come together live every day to talk, participate, and create their own entertainment together.” Twitch, a specialized live streaming network, was launched in June 2011 as a spin-off of Justin.tv, a general-interest streaming platform. It is currently owned by Amazon, who paid US$970 million for Twitch in August 2014. Twitch is currently the market leader in interactive live streaming, with an amazing community of more than 7.57 million active Twitch broadcasters, according to numbers published in January 2022. Amazon’s purchase of the platform in 2014 was the company’s sixth most costly acquisition, demonstrating how valuable the video game live streaming service is to the digital giant.

Let’s take a look at the benefits and drawbacks of Twitch broadcasting.

YouTube is the most popular video sharing and social networking platform on the internet. However, it is also the world’s second-largest online video game broadcasting platform, with an entire subsite dedicated to gamers called YouTube Gaming. YouTube Gaming offers a vast community of producers who viewed a total of 1.31 billion hours of video in Q3 2021, second only to Twitch in terms of daily broadcasters. YouTube has also enticed several high-profile streamers away from its main competitor, which is a good indicator that the site is developing. Valkyrae is the most prominent, having acquired a deal to live broadcast exclusively on YouTube in January 2021.

What makes YouTube the finest live-streaming video game platform? Let’s look at the advantages and disadvantages.

Facebook: A live video game and social media experience rolled into one

Although Facebook is most recognized for its social networking platform, it also has a presence in the live video game market. The social media behemoth established a gaming subsite in 2018 that had many of the same features as its main rivals. If you’re active on Facebook and have a following that engages with your content on a regular basis, the Meta-owned platform could be a good fit for your live broadcast. Your video game broadcast might surface in people’s news feeds who don’t follow you, according to Facebook’s clever algorithm. This might provide you a significant edge when it comes to launching your channel.

Despite its recent entry into the live gaming sector, Facebook still has certain advantages to consider. The advantages and disadvantages of broadcasting video games on Facebook are listed below.

Also check out How to Delete a Yelp Account?

Now that you know the advantages and disadvantages of each platform, think about your unique situation and the features you want to emphasize before making a final selection. Twitch has the highest market share, but it has a more restrictive monetization structure that might be tough to get into. YouTube offers a low entrance barrier, but it also has a lot of pre-recorded material that you will have to compete with on a daily basis. Facebook offers a variety of revenue alternatives, but it has a tiny group of everyday live streamers. If you have the time, we suggest testing out each platform before deciding.

A: this is a very complicated question with many differences and factors. I cant give you an answer that will please everyone, but I would say generally Twitch has the best variety of games while Facebook has higher retention rates on users thanks to their features like Messenger, WhatsApp, Instagram etc., they are also able to provide ads as well as sponsored content which helps in boosting viewership numbers.

A: That is difficult to answer because it would depend on what you are trying to achieve with your live stream. If you want your viewers to be able to interact in real time, Facebook might be better for that. However, if the goal of a live stream is just engagement and interaction from people who arent watching at the moment then YouTube streaming services may work better for you.

Is it better to stream on Facebook or Twitch?

A: Streaming on Facebook is an option, but its not the best choice.